The Olesko Castle is one of the three beautiful castles on the tour of the so-called Golden Horseshoe of the Lviv region.

Out of all three, this one is within the closest reach. It is also the only castle that you can easily spot from the road when headed to or from Lviv. But close proximity to all the main arteries is not the only reason why we believe you should include the Olesko castle into your European castles tour.

1. The appearance of the Olesko Castle In the chronicles of Europe was legendary

Discovering castles in Ukraine is one of the main reasons why this blog came to life. Throughout Ukraine’s rich and dramatic history, lots of wealthy and noble families lived in different regions of our country. They left quite a heritage for us to study and explore. We the Ukrainians often don’t know much about how many amazing sites are scattered around our country.

While most of the castles we’ve seen so far are in desperate need of a renovation, the Olesko Castle is in fact one of the buildings that are in good shape, both inside and outside. It survived numerous attacks, fires, and almost complete destructions. It was rebuilt from scratch, re-stocked with historic elements of decore and furniture, and hopefully, will remain in good shape for generations to come.

The fortress first appeared in chronicles in 1327. Ukraine was then divided between Poland and Lithuania, while both of those countries fought wars against the Mongol invaders.

The chronicles mentioned a Polish king Kazimier III as then owner of the castle. However, Olesko gained popularity and recognition a century later. In the 1400s, the local boyars started an uprising against the Polish control. So, the crown sent troops to make the rebels surrender.

The siege of the castle lasted for six weeks, and still, the boyars of Olesko prevailed. Eventually, the king of Poland had to issue official documents that certified that the lands around the castle belonged to the local elite.

2. Olesko Castle is home to the legendary Polish king

One of the oldest castles in Ukraine was not always glorious. The Tatar-Mongols attacked and damaged its walls a number of times. In the 1600s, Olesko became the property of the Danilowicz noble family.

In the 1620s, and in this castle, Theofila Danilowicz married a Polish nobleman Jakub Sobieski. They had seven children. One of them, Jan Sobieski, eventually became the king of Poland.

Legend has it that Theofila was in labor on the night when the Olesky Castle faced another attack of the Tatar-Mongols. They’ve been lasting for the past century and a half. By the time, the castle always managed to withstand. Whoever built it, made the right decision when laying the fundament on a hill. This hill and the tall walls of the castle made it unreachable for the enemies.

It was a dark and rainy night. His wife went into labor when Jakub received the troubling news. The Tatar-Mongols surrounded the castle once again, determined to take it this time. Finally, in the darkest hour, he heard a scream. It was his newborn son. The midwife swaddled an infant and put him on a massive marble table in the middle of the room…

…when, all of a sudden, a bolt of powerful lightning struck through the sky.

It struck through the roof and into the table, splitting it into two pieces.

Yet, the child survived.

Years later, Jan Sobieski married a woman named Marie Casimire Louise. This couple went down into history as one of the most powerful, romantic, and controversial couples in the history of Europe. A royal couple at that because Jan was elected by the Polish cote, and became Jan III Sobieski, the king of Poland. We shared the story of this couple in our post about the Zolochiv Castle.

3. The castle survived a series of unfortunate events

For a brief period of time, after Jan III became the king, the castle thrived. It was the official royal residence. Marie Casimiere Sobieski initiated massive renovations. Nobles from all corners of Europe came and stayed here to pay respects to the royal family.

And then, the king dies. His wife inherited the castle, but she was never a favorite of the local nobility, so she fled. First to Italy, then to France. Her son Konstantin eventually sold the castle to the Zholkievski Polish noble family. In a way, this was a beginning of the end of the glorious history of the Olesky Castle.

Despite being insanely rich, the family eventually drowned in debts. Trying to save what they could, they moved most of the furniture and decorations to their other property, the Pidhirtsy Castle. That did not help, either.

In 1796 everything that was left of the family’s estate, was sold on the auction, including the Castle.

During the 1800s, there were two devastating fires in the castle, one after another. In the 1830s, an earthquake affected the walls and the left wing of the fortress. By the 1890s, the well of the fortress was gone. Then, some treasure seekers found gold walled up in the castle, and that led to many subsequent raids.

Finally, in the 1950s, another powerful bolt of lightning caused what seemed to be the fire that would put an end to this amazing historic site.

And yet, the castle did not fall. Not all of it, at least.

In 1970s some Ukrainian scholars initiated a massive renovation, and eventually, brought the castle back to what it used to look like when it was a royal residence.

The Olesky Castle Today: How to Plan a Visit

The castle is part of the popular Golden Horseshoe Tour of the Lviv Region. Its opening hours are from 9 am till 5 pm. The entrance fee is 3 USD for adults, and 1 USD for children. A tour in English will cost you about 11 USD per person.

This tour includes visitation of the garden, the inner courtyard, and some of the rooms. These display furniture, paintings, and weapons. Because the castle is a fortification on a hill, it opens a beautiful panorama of the lands around it.

What is really great about the castle is that it is equally accessible regardless of whether you are in Kyiv or Lviv. Sure, if you are in Kyiv, this might be a bit of a stretch, but still, it is quite possible to do a day trip from the capital.

If you are staying in Lviv, that’s even better. We would recommend combining the tour with that part of your itinerary when you explore the western region of Ukraine. If you’re visiting just the Olesko Castle, it is about a half an hour’s drive from Lviv, and a couple of hours inside, and then back to the city. If you’re doing the Golden Horsehoe Tour (which is totally worth it), then reserve the entire day. The road to the Olesky Castle is good, but it is Zolochiv that is tricky to get to.

In our opinion, this site should appear more frequently on the list of European castle tours because its history is simply amazing. Also, close proximity to Lviv makes the trip so much more valuable. Who would miss a chance to spend a weekend in the city of Leo, with its old and tangled streets, delicious food, rich history, and the best coffee in Ukraine? Certainly not us.

I am a Kyiv-based screenwriter with 10+ years of experience in producing scripts. I love my job, and no, I did not quit it to travel the world. I see different countries in my spare time. As a storyteller, I believe that it is the emotional journey that matters the most. This is why together with my sister I started this blog to encourage everyone to travel and to do so with a heart and mind opened to adventures.

I am a photographer based in Kyiv, Ukraine. I am lucky to be able to do what I love the most for a living. Photography is an endless source of inspiration for me. My mission on this blog is to inspire by sharing some of the favorite captions from my journeys. I also provide professional photography tips to help the readers bring home some beautiful photo memories.

I live in Kyiv, Ukraine. I am a screenwriter with 10+ years of experience in producing scripts. I love my job, and no, I did not quit it to travel the world. I see different countries in my spare time. As a storyteller, I believe that it is the emotional journey that matters the most. This is why together with my sister I started this blog to encourage everyone to travel and to do so with a heart and mind opened to adventures.

3 thoughts on “The Olesko Castle: 3 Amazing Facts About It” 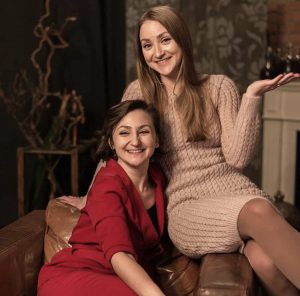 If you are ready to power through our not-that-perfect English, there is lots of content in this blog that can help you plan a great trip to Ukraine:) And to a few other beautiful countries.

We’re Inessa and Natalie, sisters living in Kyiv. Both of us have day jobs (Inessa is a screenwriter, and Natalie is a photographer), and whenever possible, we try to fit traveling into our schedules.

Most of all, we enjoy exploring our home country and discovering great things to see in Ukraine. Here is to hoping this travel blog can provide you with some valuable insider information from the locals.